Foggy August equates to Fogust in this part of the world, but for our family it could be called the same for the blur of activity that went on and is going on. Right during the busiest time of our season a pipe in one of the bathrooms decided to burst. 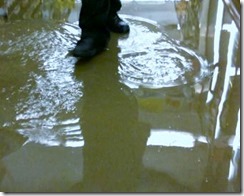 We woke up to a puddle in the kitchen, and a flood in the bathroom and hallway. The water had also seeped into our daughters bedroom and laundry room.  At first we thought the toilet had flooded and that our daughter who has Autism was trying to use the plunger, but it was quickly obvious that a simple leak was not the problem,  it turned out to be much bigger. The valve couldn’t be shut off because the break had occurred just below it. As our nice laminate floating floor began to blister it became obvious that we’d have to involve the Insurance. Water was being trapped between it and the original floor. Their first question was  “Is it Poly B?” They know it is a problem. In 2010 a class action lawsuit for $950million had been settled in Canada and the USA, but of course we were oblivious to that knowledge. Fixing this pipe would be at our own expense since the Insurance considers this a home maintenance problem, not ‘damage’ itself.

Insurance, assessment, repairs. Noisy fans, nights spent at hotels, no access to washer and dryer, no bedroom and respite room for our daughter, no access to her washroom, most of the furniture crammed into the living room, all during the busiest and most stressful time of the year. It’s been difficult to concentrate on work. Right now things are quiet and work should be completed by September 12th. We decided to pay extra and have our daughters room renovated with a floating laminate floor also, instead of carpeting,  plus hubby painted her ceiling while it sits empty. We also had a Plumber replace all the Poly B pipe to PEX which is a relief because we don’t want to risk another disaster. I feel for the people that have this plumbing in their home and don’t even know it.

OH…and before I forget…I have a SALE in my Etsy shop. Until August 31, use SUMMERTIME2 for 20% off any purchase, no minimum required...if you miss it, use SUMMERTIME20 until Sept 21, but there is a $12 minimum.
The Sale...just because…
Email ThisBlogThis!Share to TwitterShare to FacebookShare to Pinterest
Posted by Beadcomber at 10:46 PM 3 comments

Now what may those two things have in common? Not much other than Reflections can be something one sees when looking in a mirror or when remembering the past. For me it’s the latter because today I received an email from my father who lives in Germany. We haven’t seen one another in many years and he told me he had been looking at some photos of when I had visited him in Germany in late1989, including this one, of when I first started to work with Fimo! Gosh…that is almost 24 years ago!! Perms…never again, lol. You might recognize some of the metal pulvers on the desk and the paper in the basket at my feet is a good indicator of the year. What was I working on…brooches. I’ll have to find that booklet I was using…or maybe create some of those pins again. 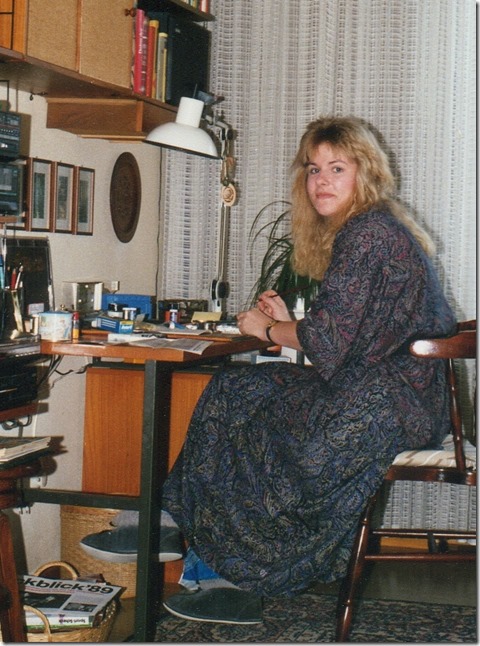 Nice to think back to some good ol’ days.

So what was I working on over the last couple of days? Brooches…but of a different sort. I was asked by a local Gallery to make some eyeglass holders. Normally one would think of those long leashes worn as a necklace with the little rubber gasket type of ends. I made a few beaded ones, but then wanted to make some with polymer clay and came up with these since the Gallery likes my Ocean Themes. Sand dollars which can be worn either as a brooch or pin, but also as a necklace as the brooch findings have a loop for cord. 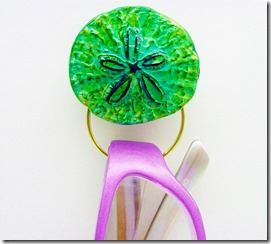 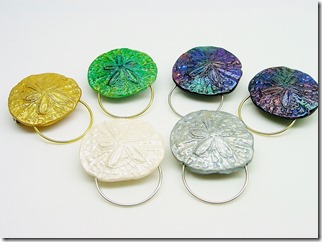 Email ThisBlogThis!Share to TwitterShare to FacebookShare to Pinterest
Posted by Beadcomber at 11:22 PM 2 comments