Not without pain or funny sarcasm. I was sooooo excited to hook up my new computer. It'll be faster! It'll have more room! It'll be easier to navigate!
Not! My old Windows ME was a reliable tool for seven years. Some people groaned when they would hear I had an ME, but for me it was easy because I knew it inside and out. I felt like a happy geek!
This new PC, Vista Home Premium, lol...well, it already has issues right out of the box. I now wonder if I should have heeded that funny commercial on TV where the Mac and PC have a mediator who keeps asking "Allow or disallow" and PC says "Allow" several times and then the announcer says:"And PC comes to a sad realization..." ....."Allow". Yup, I already have problems with the Display driver (which is uptodate), error windows popping up here and there and some of my older programs such as CorelDraw 8 don't work at all, won't install properly or things don't get recognized, even though I tried installing it so that Vista 'thinks' it is an older O/S which Vista recommends, ha! Finally got my MS PictureIt publisher 2001 to work that way, but then it IS a microsoft product. Yikes...after a full week I think I have spent enough days trying to figure out what I needed to figure out...not! One would think this new platform was supposed to be easier, not more difficult. Mr. Gates has nothing better to do than 'improving' things that should well enough be left alone. Just when Windows XP with SP2 was getting its legs, lol, along comes a new and improved system.
Can you afford and buy a new and improved program every time he adds something new? or do you want to...lol, there IS a difference. 7 years is really not that long! and I feel guilty taking the bait! We have become such a throw-away society that way. What happens to all the discarded computers? Only so many can be recycled and rebuilt!
Corel wants me to throw away the 10 year old version because they want me to support them a bit by spending another $489 for its full version...and the Drawing program isn't really any different than the old version! Very much the same, except.....the colour Palette has changed. So what I have had to resort to right now...I got the 15 day trial version installed, opened all my files that I used for printing my own jewelry labels such as earring, necklace cards, business cards etc etc and exported them into Microsoft Office , so that I can actually still print them...for 60 days because MS Office is only a Trial version also. Haha on me, eh? Haven't tried installing my old 2000 version yet, haha. I won't have another Corel Program available and its extensions .cdr files ONLY open with Corel. I am stubborn and refuse to give Corel any more money when I feel I shouldn't have to. Instead I still have my Serif Draw which is a Freeware Program from the UK. It works fine, but not quite as many features as my old Corel. I should have saved for another couple of years and bought a MAC. Unfortunately, even though I was patient enough, my reliable ME with only 127mb ram was getting tooooooo slowwwwww and I had to defrag, clean disc, clean temp folders on a weekly basis and reboot countless times....poor thing. (Gosh, now I feel SORRY for my old computer, no wonder they call it PERSONAL computer...am getting personal, lol).
OH, I shouldn't complain so much, there ARE a few pluses for this new one. It has LOTS of storage space. It is light! It has 360 GB for room, but actually ONLY has 250 left because VISTA is such a pig when it comes to taking up room, lol. It is nice and quiet though! And it has lots of free trial versions of programs. Its a trial alright.....
Mr. Gates....now I KNOW why you and your partners at Corel, Adobe and Norton are so rich!!....Haha on me. My final lesson...the cost of upgrading doesn't just involve the Hardware. Oh, how I wish I could have stuck with ME, but only a faster RAM.
Email ThisBlogThis!Share to TwitterShare to FacebookShare to Pinterest
Posted by Beadcomber at 6:57 PM 4 comments

Day 2 for the Chakra Canes

It was day 2 for making chakra canes, but boy oh boy!! was it ever COLD out there today. What was I doing outside? Well, for now my polymer clay making is confined to the 'sun-room' which has no heat and isn't a sealed room, so its like sitting outside with only protection from wind and rain. No sun today, but rain and the thing with the cold...I had to keep my clay in my bra otherwise the conditioning of it would have taken forEVER, lol. Wellllll, it did take a long time because I used my Fimo clays because I have so many of them stocked. Each cane took about 2 bars including black and pearl.
These are the two I came up with, they're not perfect as I worked pretty fast, but reperesent the Solar Plexus and Heart Chakras quite well, I feel. Perhaps you can see the sparkles because I only used Pearl white for the filler. I have no idea yet what I will do with these, but maybe something similar to the Harmony jewelry pieces I make. The next canes will be the Throat and Brow Chakra. The Throat chakra cane shall be tricky as I need to put 16 petals around the outside. But it won't be as tricky as the last one....the Crown Chakra with a 1000 petals!!! I don't think I can do a 1000....will see.... 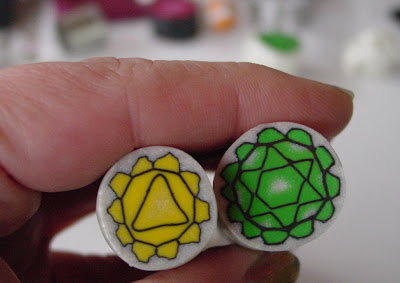 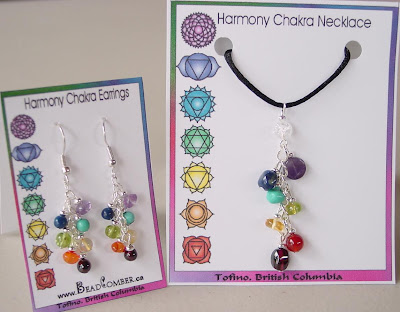 Email ThisBlogThis!Share to TwitterShare to FacebookShare to Pinterest
Posted by Beadcomber at 3:05 PM 2 comments

Today was absolutely gorgeous weather. Had to spent a bit of time outside, but no working in the yard 'cause I hurt my back and am stiff as a board! Thought I could undo the kinks with stretches, but instead found I needed help to put on my own socks. Arrrgh! I hate being sick or unable to do things for myself, so was in total self-denial....until the pain started talking!! And unfortunate me, no painkiller in the house other than ordinary shelf-stuff...so I spent some time claying to get my mind off of my back (sounds funny!). It worked for a couple of hours. Made some milifiori canes for what will be a set of 7 Chakra Petals, the symbols for the different chakras. I made Root Chakra and Sacral Chakra canes. The Sacral Chakra Cane before reducing. The Root Chakra reduced and a couple of slices. Tomorrow I plan on making the Solar Plexus and Heart Chakra Canes. 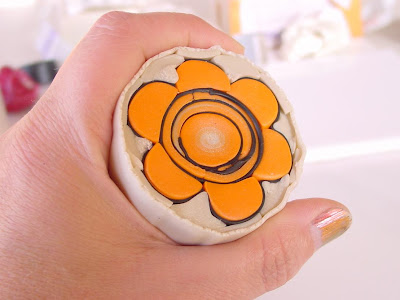 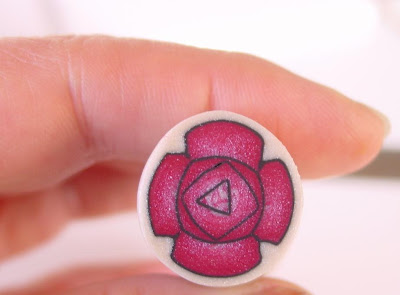 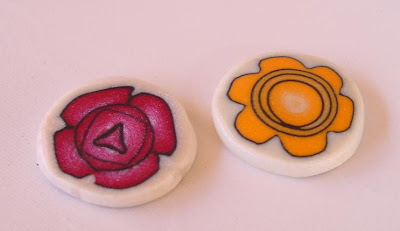 Email ThisBlogThis!Share to TwitterShare to FacebookShare to Pinterest
Posted by Beadcomber at 6:31 PM 2 comments 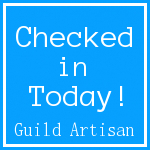